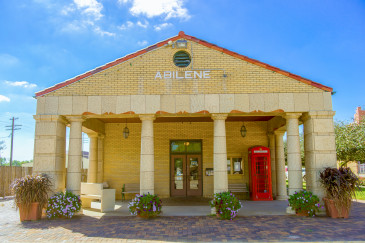 In 1911, Dwight D. Eisenhower departed from this site for West Point Military Academy. He would use this depot to return home often after 1928. His funeral train arrived here in 1969.

The Abilene Civic Center was officially dedicated in 1988 as a public-use facility. Both the passenger depot and the freight depot were placed on the National Register of Historic Places in 1991.