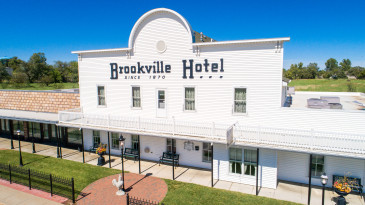 End of an Era

It is with a very heavy heart that we must announce that the Covid, and the lack of traffic has forced us to close.

We hung on as long as we could , but the writing was on the wall.

We would like to thank everyone for your patronage of the Brookville Hotel over the last 125 years that the Martin family has operated it.

Mark is grieving over this decision and the fate of our employees. Please keep him and them in your prayers.

We have been a part of so many family celebrations over the years and we will miss you all.

Thank you for making us part of your families.

Peace and Grace
Mark and Connie
--

Awarded the James Beard Award in the American Classics Category 2007. Our fabulous fried-chicken dinners are served the old-fashioned family-style way by the same family since 1915!

The Brookville Hotel traces its roots back to the 1870’s, when the railroad spread their tracks out across the prairie to meet the expected rush of Longhorn cattle coming up from Texas along the Chisholm Trail.

Originally known as the Cowtown Cafe, the hotel was one of three to spring up in what was expected to be a railroad divisional center. Brookville suffered greatly when the Union Pacific Railroad relocated its roundhouse to Junction City. Despite the steady decrease in population, the Brookville Hotel continued to do business in the small town.

In 1894 Gus and Mae Magnuson purchased the hotel. It was Mae’s cooking that started the Hotel’s reputation for great food, but it was the Magnuson’s daughter, Helen Martin, who originated the famous “Family Style Chicken Dinners” in 1915. In 1933, the Hotel passed into Helen’s capable hands.

Additions were made to the Hotel in 1948 and 1960, but by third generation family member, Cal Martin, who became a partner in the management of the hotel. Further additions to the Hotel were made in 1971 and 1978, increasing the serving capacity to 200.

In 1982, the ownership of the hotel passed to Mark and Connie Martin, the fourth generation to serve the famous Brookville Family Style Fried Chicken.

In 2000, the decision was made to move the restaurant to Abilene, locating the restaurant closer to the Interstate Highway which continues to bring a steady stream of people searching out the best fried chicken dinners in Kansas.

The Martins have replicated the facade of the original Brookville Hotel, and the dining rooms retain the decorations and feel of the originals. The newly build “Spirit of Kansas” room and the “Brandy’s Opera House” room, which was added in memory of the Martin’s daughter, continue the practice of building on a tradition that began in the 1870’s, and was made famous in 1915 when the first Family Style Chicken Dinner was served at the Brookville Hotel.