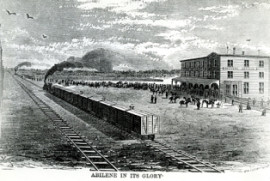 A surveyor from Illinois searched for a quiet tract of solitude.  The sea of buffalo grass along the banks of Mud Creek made for an ideal setting.  It was July of 1857, a small cabin was built, and the Timothy Hersey family became the first settlers of Abilene.

Thompson and Hersey needed a name for their new town, so they asked Hersey’s wife, Eliza to pick out the name.  Eliza consulted her bible, opened up to Luke 3:1 where the scripture speaks of the “Tetrarch (ruler) of Abilene,” a province in Judeah.  The Greek form of the name translates to “meadow”, and the literal meaning is “city of the plains.”

Thompson worked hard to entice settlers to move to the county seat of Dickinson, promising the land was the most fertile and beautiful that could be found in the state.  But it would be a cattle dealer from Illinois named Joseph McCoy that would forever change the fortunes of this small town.  The railroad had just arrived along the Union Pacific Eastern Division, Abilene’s fortunes would grow because of their place along the railroad.

McCoy recognized that the southern economy was failing after the Civil War, and the shipping points for cattle in the south were all decimated.  Longhorns were dying out because the ranchers couldn’t afford to keep them fed.  But, if there was a way to ship the livestock to Chicago or New York, fortunes could be made.  The railroad would be that new shipping point, and Joseph McCoy connected the ranches of the south to the stockyards of the north by following the trail eventually named for Jesse Chisholm.  McCoy would forever be known as “The Cattle King.”

Soon, Abilene grew into a bustling Cowtown filling the streets with drovers, ranchers, gamblers, outlaws, and lawmen.  Legends like Wild Bill Hickok, Wyatt Earp, John Wesley Hardin, Jesse and Frank James and Cole Younger were just a few of the thousands that would be brought to Abilene because of its reputation.  These were wild, dangerous times where the law had no place, and the “no gun ordinance” was filled with bullet holes.

Mayor T.C. Henry finally found the man that could tame the streets of Abilene in the form of a tough Irish middleweight boxer known as “Bear River”, Tom Smith.  Smith would rarely be seen with guns, and his fists would do most of the talking.  Soon, the drovers recognized that they did not want to tangle with Smith, and they started following the law and order of the town.  Smith quieted the town for the season 1870, but as he went to deliver a warrant to two homesteaders on the north side of town, Smith was killed in a tussle near their dugout.

McCoy, now mayor of the town, reluctantly hired James Butler Hickok, better known as “Wild Bill”.  Hickok was one of the most colorful personalities of the west. He was a ladies man, wearing silk shirts and perfume, but he also was one of the deadliest guns in the west.  Eventually, the citizens of Abilene had enough, as their town was growing on the Northside of the tracks, they could not co-exist with the dangers of the south side of the tracks.  After the season of 1871, the longhorn business was shut down in Abilene.

To replace the multi-million dollar business, T.C. Henry, the Wheat King, had secretly sowed a five-acre patch of winter wheat in a quiet section of town.  Though winter wheat was successful in Minnesota, people would think Henry was a fool to try to grow it in the Great American Desert.  As the wheat began to take, he knew that he could change the fortunes of the town, and for the state of Kansas and beyond.  Within four years, this land was known as “Wheat country.” Thousands of acres of wheat fields would be known as Henry’s “Golden Belt”.

In the first few years, the town had to wonder if they made a good decision, for fires, floods and grasshoppers made farming impossible.  But, men with big dreams kept rebuilding, making the town a little better each time.  Those dreamers that read the stories of the Wild West, came here to make a dollar off the drovers but saw so much more potential.  The second empire of Abilene was an attempt to turn the town into a cosmopolitan fashion center, on the cutting edge of technology, lighting the streets with electricity, a system of streetcars lined the streets, carriage works, lock works and much more made Abilene, “the Chicago of the Plains.”

Men that started with very little money, but big dreams created empires in Abilene.  The A.B. Seelye Medicine Company started in a kitchen mixing cure-alls, and spread to 15 different states and 500 salesmen that offered 84 different products from the catalog.

C. W. Parker purchased a small merry-go-round in 1896, and built a legacy that would crown him as the “Amusement King”.  Over 450 carousels were built by the Parker manufacturers.  Ferris Wheels, shooting galleries and sideshows would fill the carnival grounds across the country.

A. L. Duckwall opened a racket store in 1901 in Abilene, and would eventually grow into the ALCO retail merchandising chain.

Cleyson L. Brown started his empire with a tragedy.  As a young boy, he lost his arm in a farming accident, Brown would not be able to work on his family’s farm, but he would go on to become an industrialist, a utility magnate, a philanthropist.  His legacy continues to this day as his United Telephone Company is now Sprint, United Power and Light is now KPL/Westar and Brown Memorial Home is still active.

R.H. Viola arrived in Abilene in 1903, starting as a shoe repairman, and worked his way up to one of the largest home owned retail business operations in the state.

Belle Springs Creamery opened a plant in Abilene and would be responsible for bringing the Eisenhower family back from Texas.  David Eisenhower was hired to work for the creamery, his son Dwight D. Eisenhower, became the Supreme Commander in Europe during WWII, and the eventual President of the United States.

Though the population of Abilene has stayed steady, Abilene has always been at the right location at the right time.  The stagecoach line, the Chisholm Trail, Kansas Pacific Railroad, the Golden Belt Highway system and the Interstate.  This continues to draw large manufacturers and big businesses, a tradition that has continued since the first longhorn herd arrived.