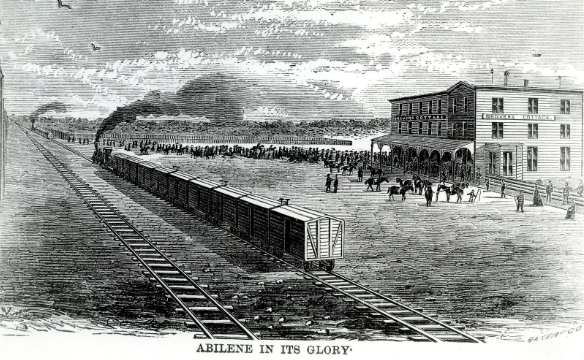 As construction crews dig deep into the pages of history, secrets of the Drover’s Cottage are unveiled. The new courthouse addition is being constructed in the former location of the famous hotel. The cottage was built by Joseph McCoy in 1867 to entice wealthy cattle buyers into Abilene.

Eventually he sold the hotel to his head chef, Colonel Gore, and his wife Louise. The Gore’s had made a name for themselves running the exquisite Planter’s Hotel in St. Louis.

After 1870, the hotel expanded to 100 sleeping rooms, a fine dining restaurant, a small stage, billiard tables, poker tables, and a massive horse stable that was as big as the hotel itself. Most of the hotel was taken down and rebuilt in Ellsworth as the cattle trade moved, but the remnants of the old building still stood when the Belle Springs Creamery moved their operation to the previous location of the cottage. It’s time to unlock odd or memorable tales of the infamous hotel and its storied past. 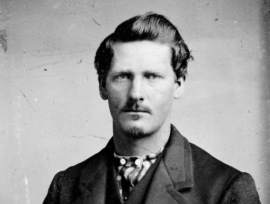 Wyatt Earp, the famous lawman made bigger than life, in 1868 took on a job grading railroad tracks in Wyoming before rejoining his family in Lamar, Missouri in 1869 picking up his first job as a lawman. On his way to Missouri from Wyoming, Earp was a well-known gambler that was good enough to get a seat at the table at the Drover’s Cottage. It was well known that the common cowboys and vaqueros would find their tables at one of the lesser saloons on Texas Street, but the real gambler found a place on the fancy tables at the palatial hotel.

No real disputes occurred during Earp’s short time here, but he got the attention of the townsfolk with his presence.

C.W. Merchant the ex-confederate soldier from Texas that started in the cattle business in 1869.

Three Texas cattlemen, including C.W. Merchant, were seated in the dining area of the Drover’s Cottage discussing plans for their newly acquired 1,700 acres in Northern Texas. The discussion was overheard what could they possibly name this new town? According to the Texas State Historical Society page, Merchant named the Texas town after Abilene, Kansas.

We can credit the bible for Abilene, Kansas. Ten years earlier, Eliza Hersey, the first lady of Abilene, was asked by her husband and postmaster C.H. Thompson to name the town. She let the pages flutter in the wind and the bible stopped on Luke 3:1, in the middle of the page glowing was the word “Abilene” translated to City of the Plains. It was meant to be. There are over 783,000 words in the King James Bible, and Abilene only appears once.

Abilene’s first telegraph operator was a man name J.E. Lytle. He was boarding at the cottage, and after he spotted a flock of ducks at a nearby pond north of the tracks he boisterously declared, “there is going to be ducks for dinner tonight.” He went back to his room, loaded his shotgun, and set off to bag his dinner. As he took his shot, the gun recoiled against his head and knocked out all of his teeth and horribly disfigured his face. The newly hired Lytle was soon relieved of his duties and replaced by D.R. Gorden, who spent the rest of his life as a prominent citizen of Abilene. Gorden’s home, built in 1877, still stands today at 400 N. Cedar. Gorden should thank a few ducks for creating a job vacancy. 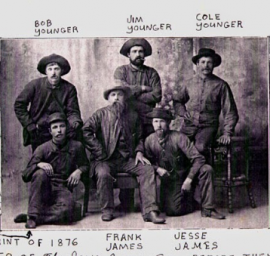 E.F. Gross was a clerk at the Drover’s Cottage, and a longtime friend of Gross came into town when Madam Lake’s Circus arrived. The friend had three strange men with him. They were strange in the way that they acted. They were gambling heavy and drinking light. Drovers usually did it the other way. Gross started asking too many questions, and his friend arranged a midnight meeting with the strange men all sharing one room. Gross did as he was instructed, and the lead man opened the door just a crack to peek through, and saw that Gross was alone so he let him in.

They informed Gross that they would prefer him to quit asking questions to draw attention to them, so they are going to let him in on the secret.

These were the three most wanted men in the country, at one time, an unsurmountable amount of $10,000 on each of their heads.

Puzzled at this, Gross had to ask, “How does Wild Bill not know you are here?” They all laughed and Cole Younger, who seemed to be the smart one of the three said, “of course he knows we’re here. We know each other from back in Missouri. But we’re not looking to make trouble, because it will cause unneeded attention to our Texas friends here.”

Also, Marshal Bill is wise to leave us alone because we have men watching him every minute of the day.”

They stayed in the cottage for a week, molesting and robbing towns nearby, but never Abilene. 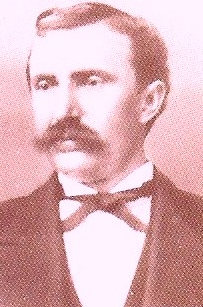 Two bankers; the master, Jacob Augustine; and his apprentice, Conrad Lebold, were recruited by Joseph McCoy when they were in Mendota, Ill. to find the opportunity out west. They arrived in Abilene in 1870. Lebold was carrying a heavy amount of cash to buy up some property. He had $3,000 in a money belt, which is about the equivalent $59,000 today. Since there was no reputable bank in Abilene yet, Lebold stored the money in his room at the Drover’s Cottage.

Word got out quickly that some rich Easterners were in town, and a thief broke into Lebold’s room while he slept. The thief got ahold of the money belt but stumbled out of the dark room, awakening Lebold. Lebold grabbed his pistol and went for the pursuit of the thief.

Down the hallway, the thief found an empty room, but not for long. Lebold busted through the door and shot the man dead and recovered the money from his victim, who turned out to be a well-known thug from St. Louis. Lebold got a slap on the wrist and started building his empire.

For these stories and more, visit Old Abilene Town and the Dickinson County Historical Society. See the 1:24 scale model of the Drover’s Cottage and the buildings that stood in Abilene in 1871 at Old Abilene Town.