In October 1977 one of the first actions taken by the Abilene Bicentennial Commission when it was appointed by the city of Abilene in 1975 was a decision to erect an undetermined number of historical site makers.  With no funds, the first decision was not to go to the taxpayers.  Henry Jameson, as chairman, delegated it to a sub-committee.  The committee took the assignment seriously and the site markers were installed at 11 locations around the city.  The theme is a cross-section of Abilene history in the overall, more than individually labeled specifics.  The committee started with 11 markers, which were fairly costly, but of lasting design and construction, and the eleven exhausted the committee’s budget.  Six are mounted on posts, five on buildings.

Their locations and information are as follows: 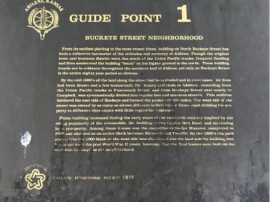 From its earliest platting to the most recent times, building on North Buckeye Street has been a reflective barometer of the attitudes and economy of Abilene.  Through the original town and business district were due south of the Union Pacific tracks, frequent flooding and fires accelerated the building “boom” on the higher ground to the north.  These building trends are in evidence throughout the northern half of Abilene, yet only on Buckeye Street is the entire eighty year period so obvious.

By the mid-1880’s all the land along the street had been deeded and in most cases, lot lines had been drawn and a few homes built.  The Kuney and Hodges Addition, extending from the Union Pacific tracks to Fourteenth Street and from Buckeye street east nearly to Campbell, was systematically divided into regular lots and spacious streets.  This addition bordered the east side of Buckeye and formed the pattern visible today.  The west side of the street was owned by as many as eleven different individuals or firms, each dividing his property to different dimensions with little regard for roadways.

Home building increased during the early years of the twentieth century inspired by the rising popularity of the automobile, the building of the Golden Belt Road, and increasing local prosperity.  Among these homes was the magnificent Seelye Mansion, completed in 1905 and situated on an entire block between Eleventh and Twelfth.  By the 1920’s the park planned for the 1300 block on the west side was abandoned and the land sold for building lots.  It was not until the post World War II years, however, that the final homes were built on the west side to complete the neighborhood. 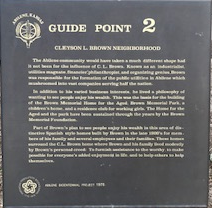 The Abilene community would have taken a much different shape had it not been for the influence of Cleyson L. Brown.  Known as an industrialist, utilities magnate, financier, philanthropist, and organizing genius, Brown was responsible for the formation of the public utilities in Abilene which mushroomed into vast companies serving half the nation.

Part of Brown’s plan to see people enjoy his wealth is this area of distinctive Spanish style homes built by Brown in the late 1920’s for members of his family and several employees and their families.  These homes surround the C. L. Brown home where Brown and his family lived modestly by Brown’s personal creed:  To furnish assistance to the worthy, to make possible for everyone’s added enjoyment in life, and to help others to help themselves. 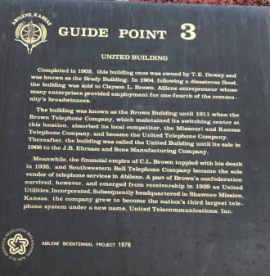 Completed in 1903, this building once was owned by T. El Dewey and was known as the Brady Building.  I 1904, following a disastrous flood, the building was sold to Cleyson L. Brown, Abilene entrepreneur whose many enterprises provided employment for one-fourth of the community’s breadwinners.

Meanwhile, the financial empire of C. L. Brown toppled with his death in 1935, and Southwestern Bell Telephone Company became the sole vendor of telephone services in Abilene.  A part of Brown’s confederation survived, however, and emerged from receivership in 1939 as United Utilities, Incorporated.  Subsequently headquartered in Shawnee Mission, Kansas, the company grew to become the nation’s third-largest telephone system under a new name, United Telecommunications, Inc. 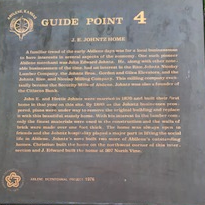 A familiar trend of the early Abilene days was for a local businessman to have interests in several aspects of the economy.  One such pioneer Abilene merchant was John Edward Johntz.  He, along with other notable businessmen of the time, had an interest in the Rice, Johntz, Nicolay Lumber Company, the Johntz Bros., Gordon and Giles Elevators, and the Johntz, Rice, and Nicolay Milling Company.  This milling company eventually became the Security Mills of Abilene.  Johntz was also a founder of the Citizens Bank.

John E. and Hattie Johntz were married in 1870 and built their first home in that year on this site.  By 1880, as the Johntz businesses prospered, plans were under way to remove the original building and replace it with this beautiful, stately home.  With his interest in the lumber company, only the finest materials were used in the construction and the walls of brick were made over one foot thick.  The home was always open to friends and the Johntz hospitality played a major part in lifting the social life in Abilene.  Johntz’s sons built two more of Abilene’s outstanding homes.  Christian built the home on the northwest corner of this intersection and J. Edward built the home at 307 North Vine. 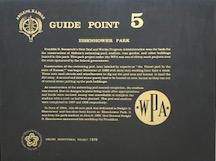 Franklin D. Roosevelt’s New Deal and Works Progress Administration was the basis for the construction of Abilene’s swimming pool, stadium, rose garden, and other buildings located in this park.  This park project under the WPA was one of thirty such projects over the state-sponsored by the federal government.

Construction of the swimming pool, later labeled by experts as “the finest pool in the state of Kansas,” began in December of 1936 with sixty men working four days a week.  These men used shovels and wheelbarrows to dig out the pool area and horses to haul the dirt away.  A second and third stone quarry had to be located on area farms as they ran out of natural stone putting up the park buildings.

As construction of the swimming pool neared completion, the stadium was started.  Due to changes in plans being made after appropriations and bonds were secured, money was unavailable to complete the stadium with a roof, as had been planned.  The pool and stadium were completed in 1937 and 1938 respectively. 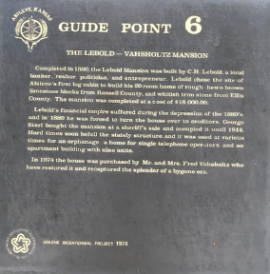 Completed in 1880, the Lebold Mansion was built by C. H.  Lebold, a local banker, realtor, politician, and entrepreneur.  Lebold chose the site of Abilene’s first log cabin to build his 20 room home of rough-hewn brown limestone blocks from Russell County, with whitish trim stone from Ellis County.  The mansion was completed at a cost of $18,000.00.

Lebold’s financial empire suffered during the depression in the 1880’s, and in 1889 he was forced to turn the house over to creditors.  George Sterl bought the mansion at a sheriff’s sale and occupied it until 1918.  Hard times soon befell the stately structure, and it was used at various times for an orphanage, a home for single telephone operators, and an apartment building with nine units.

In 1974 the house was purchased by Mr. and Mrs. Fred Vahsholtz who have restored it and recaptured the splendor of the bygone era. 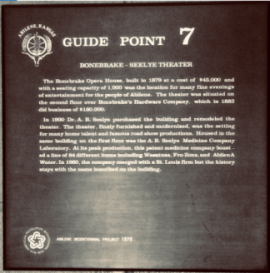 The Bonebreak Opera House, built in 1879 at a cost of $45,000 and with a seating capacity of 1,000 was the location for any fine evenings of entertainment for the people of Abilene.  The theater was situated on the second floor over Bonebreak’s Hardware Company, which in 1882 did business of $180,000.

In 1900 Dr. A. B. Seelye purchased the building and remodeled the theater.  The theater, finely furnished and modernized, was the setting for many home talent and famous roadshow productions.  Housed in the same building on the first floor was the A. B. Seelye Medicine Company Laboratory.  At its peak production, this patent medicine company boasted a line of 84 different items including Wasatusa, Fro-“Zona, and AbilenA Water.  In 1960, the company merged with a St. Louis firm but the history stays with the name inscribed on the building.

In 1930 Homer Strowig purchased the property and created a movie theater on the first floor, known as the Plaza Theater with its full-sized movie screen and featuring beautiful 1930’s décor, complete with tapestries on the walls and art-deco ceilings.  It was in June 1952 that Five Star General Dwight D. Eisenhower held his first press conference as a candidate for President of the United States.  The Plaza featured first-run movies until 2000 when part of the structure ‘fell down” and the building had to be demolished.

8.  Abilene 1867 – Buckeye and Texas Street (across from the Dickinson County courthouse). 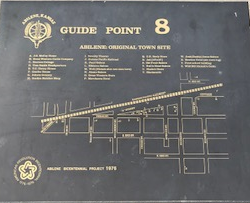 This was the end of the Chisholm Trail and the hub of cattle day activity.  The Map on the marker shows Texas Street made famous by cowboys with surrounding buildings, sites of stores, school, saloons, etc. of that era.

9. Belle Spring Creamery - on Court Street (behind County Courthouse – will be re-installed when the courthouse renovations are completed.) 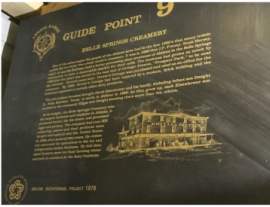 One of the advantages the people of the Abilene area had in the late 1880’s that many communities did not enjoy was a local, modern creamery.  It was in 1886 that J. F. Forney, Noah Hersey, and C. S. and Eli Hoffman built a butter processing plant southeast of Abilene in the Belle Springs community to have a dependable market for their milk.  The business had grown so much by 1890 that the plant was moved to the east end of Cottage Avenue, “Prospect Park,” to be near the railroad.  Several years later, Drover’s Cottage was purchase and used as an office for the creamery.  By 1903, Drover’s Cottage had been replaced by a modern, brick building and the business expanded to include other dairy products.

The job of plant foreman brought David Eisenhower and his family, including infant son Dwight D., from Denison, Texas, to settle in Abilene in 1892.  As they grew up, each Eisenhower son worked at the creamery; Edgar and Dwight working there more than the others.

At its height, the Belle Springs Creamery was the largest business and employer in Abilene.  It produced butter, ice, ice cream, and processed eggs and poultry.  The company had over 200 collecting point and their products were bought and used all over the United States.  In 1958, after seventy-two years, the creamery narrowed its operations to the ice and refrigeration locker business.  By this time, most farmers were too busy farming wheat and milo to continue in the dairy business. 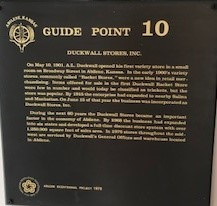 On May 10, 1901, A. L. Duckwall opened his first variety store in a small room on Broadway Street in Abilene, Kansas.  In the early 1900’s variety stores, commonly called “Racket Stores,” were a new idea in retail merchandising.  Items offered for sale in the first Duckwall Racket Store were few in number and would today be classified as trinkets, but the store was popular.  By 1915 the enterprise had expanded to nearby Salina and Manhattan.  On June 15 of that year, the business was incorporated as Duckwall Stores, Inc.

During the next 60 years, the Duckwall Stores became an important factor in the economy of Abilene.  By 1968 the business had expanded into 6 states and developed a full-time discount store system with over 1,250,000 square feet of sales area.  In 1976 stores throughout the midwest are serviced by Duckwall’s General Offices and warehouse located in Abilene.

On several acres of land south of S. E. Second Street between Kuney and Campbell Streets, C. W. Parker owned and operated a “manufactory” of amusement devices from the mid 1890’s to 1910 when he moved his business to Leavenworth.

His company made organs, tents, circus wagons, show fronts, other carnival and circus equipment, and the railroad cars on which to transport them.  He was best known for the patented Parker Mechanical Shooting Gallery and for his portable jumping horse carousels, which he called “Carry-Us-Alls.”

Charles W. Parker was the only one of the manufacturers of carnival equipment who also owned and operated traveling carnivals.  In the summer of 1905 he had four complete carnivals traveling the Mid-West, South and West.  Each carnival had a staff of around 200 and was carried on at least 12 train cars.