From homes with connections to C.L. Brown, C.H. Lebold, bank presidents, WWII Veterans and immigrants to a special farmhouse and growing church, you won’t want to miss the Heritage Homes Association’s 45th Homes for the Holidays Tour! Tickets are $10 and are available in advance starting November 15 at West’s Plaza Country Mart, SK Designs and Abilene Downtown Antique/Mud Creek Malls, and during the tours at Community Bible Church. 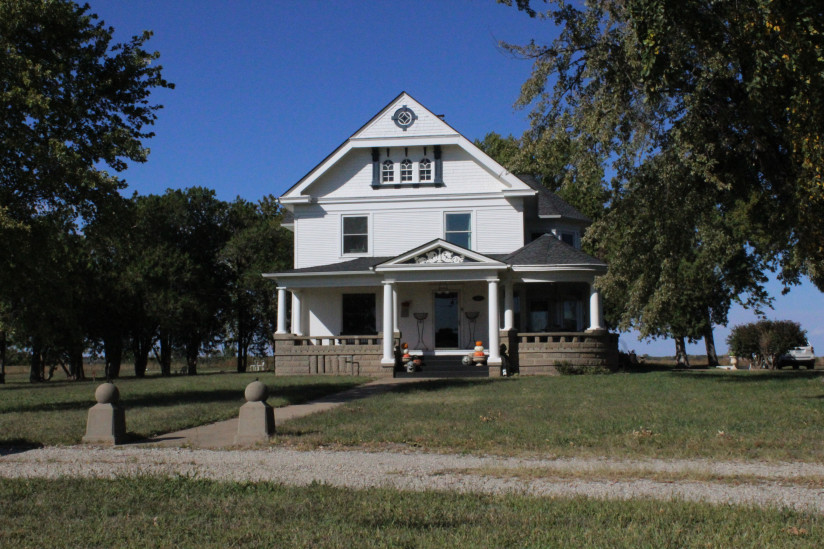 Homes in the country are difficult to determine the date of construction because there is no definition as to whether the increase in value and taxes is due to the construction of a home, a barn, a shed, etc. In reviewing the tax valuation of the property at 849 E. 1st street, and extensive newspaper research by the current homeowner, David DeBates, it is determined that the home was built in 1908 by C. W. Miller. He owned the southeast quarter south of the railroad tracks in Section 15, Township 13, Range 2. And it was completed in 1909 when the property valuation rose from $7,800 to $10,300, with the taxes increasing from $63.96 to $105.06.

With five bedrooms and two bathrooms, this was a perfect home for the Gravies as they had seven children – four girls and three boys. The neighbors to the east remember the Garvies farming the land for many years.

The Abilene City Directories show members of the Garvie family remained at this address until 1985 when Lawrence W. Garvie (single), the youngest and last of the James Garvie family, sold the property to Ed and June Kuntz.

Ed and June owned the A & W, Mr. K's Buckboard restaurant, Mr. K's Farmhouse (formerly Lena's restaurant), and Mr. K's Express. Ed died in 2001, leaving the home to his wife, June. June married Gerald Atkinson, and in 2004 they sold the house to Ted and Katy Barbieri.

Ted was in insurance sales, and Katy was an R.N. in a Salina hospital and lived with their five children.

Sixteen years later, in 2020, the Barbieri's sold the home to David and Christi DeBates, the current owners. The DeBates fell in love with the originality of the house, the beautiful hardwood floors and especially the large porch that extends across the entire front (south) façade and most of the east façade, to name a few of the home's features. 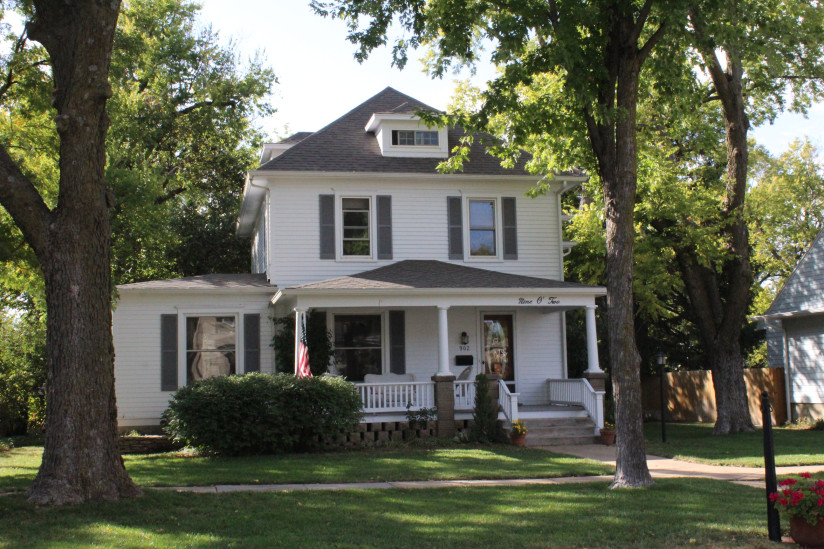 Built in 1910 by Abraham Brown, he was engaged in the building and contracting business. He erected the beautiful home residing there until his death in April 1916. The funeral services were held at home and conducted by the Re. Dr. F. S. Blayney of the Presbyterian Church.

Mr. Brown purchased the property from Frank J. Parker in September 1909. Mr. Brown’s obituary reads: “In 1895, the family moved to Hope, where he engaged in the business of building and contracting for ten years and returning to north Dickinson where he resided until 1910 moving to Abilene and erecting the beautiful home on North Olive Street.” This makes it very clear that Abraham Brown was the builder, and the home was erected in 1910.

Maude Brown married George A. Duffy in 1905, and they had two sons, Francis and Deane. (Note:  in later years, Francis owned the home at 312 N. Vine Street, Abilene, Ks. that had an alligator in a pond in the back yard.)  Maude, the only child of Abraham and his wife, inherited the home from her parents, neither of their deaths being probated.

James “Bud” and Wilmette Weishaar and family were the next to enjoy this home. He was a World War II Army veteran, having served in Okinawa and with the occupation forces in Korea until 1946. For 50 years, he was employed as an electrical mechanic for Meade Battery & Electric Co., retiring in 1996.

In the early 1960s, Alfred and Helen Murnahan were living here. “Alfred owned and operated the Murnahan Tile and Linoleum Company and was responsible for constructing the Assembly of God Church in Abilene, KS., serving as pastor.

Moving to Emporia, he again owned and operated Murnahan’s Decorating Service. He was a veteran of World War II and served in the 27th Infantry in the South Pacific Theater of Operation. He was killed in an automobile accident in June 1982, nine miles west of Emporia on Highway 50, when his station wagon struck a concrete bridge, became airborne and landed upside down in the adjoining creek.

Needing a home, not having much money and a growing family, Tom and Lynette Lucas were looking for a “fixer-upper,” which they found knowing they would have to invest a lot of ‘sweat equity’ into it. They added the garage and lived here for ten years before selling it to current owners, Mike and Cathy Whitehair. 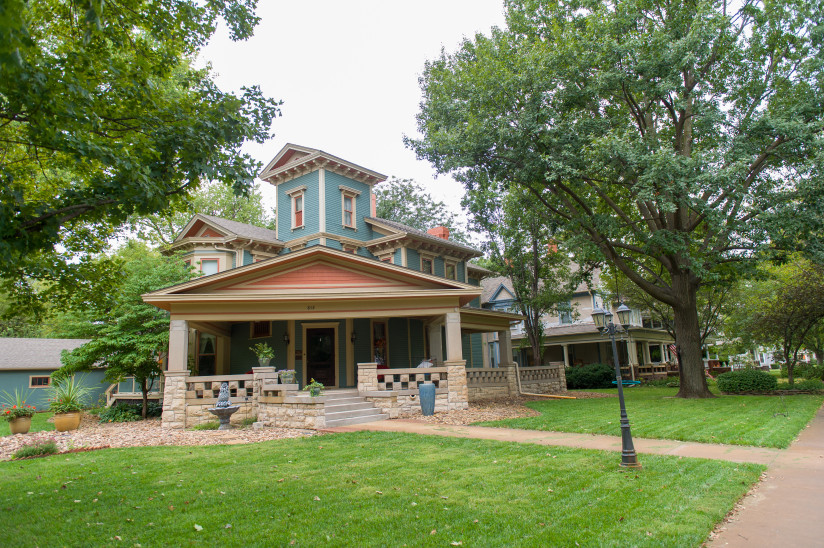 Built in 1886 by Clarence F. Mead, a prominent attorney, the home offered many luxuries for his bride, the former Juanita Wise, such as a call button summoned the maid. This Italianate home was built with an open plan and spacious interior - quite a departure from familiar architectural tradition.

The first floor consists of a foyer, dining room, library attached to a large living hall, and a sunny morning room that has two built-in China cupboards with leaded glass doors.

In 1901 George A. and Della Brown Rogers bought the home and added the massive front porch a few years later. The columns and masonry of the porch are of the Richardsonian Romanesque style.

Delia was the daughter of C. L. Brown, the Abilene man whose success in the milling, utility and telephone business led to the establishment of United Companies.

In 1923 George and Della replaced the existing bathrooms, staircase, floors and woodwork, with the exception of the library. New oak flooring was laid over the old pine floor. They also added the second-floor bay windows, extending one of the hallmarks of the Victorian façade from ground level through two stories.

The second floor also includes a bedroom with a half bath that could be reached via a back stairway for the maid at the south portion of this level. The second floor is completely divided by a long hallway with windows on the north and south ends and bedrooms for the family.

From 1900 to 1928, George Rogers served as president of the Abilene National Bank. He bought 12 acres of land, including Sand Springs, from an eastern estate and built a pipeline to the springs offering the entire system to the city for exactly his cost, $5,000. Abilene secured the finest system of water in the state almost as a gift, according to the March 10, 1928, issue of the Abilene Daily Reflector. In 1928 when George Rogers died, the Governor of Kansas was among those who attended the funeral in the home.

The house features four sets of pocket doors, three of which have glass panels. 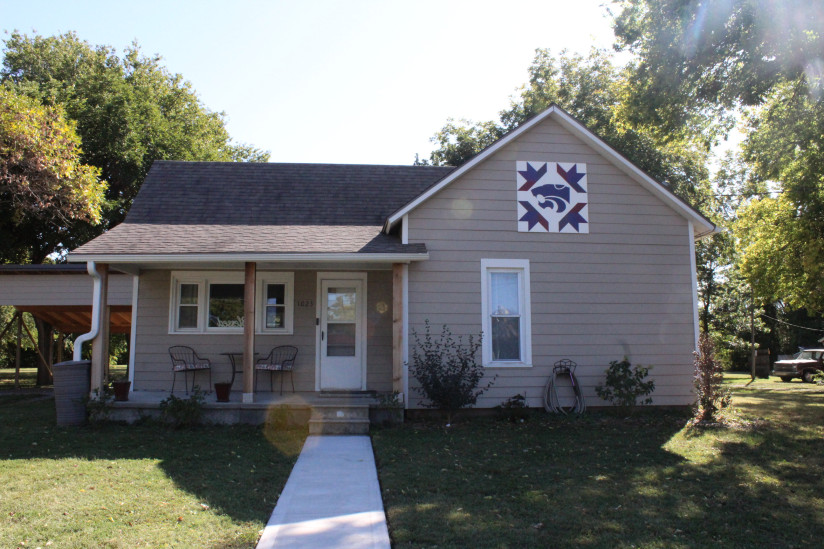 Lebold’s Addition to the city of Abilene begins in 1876, but not until 1882 does the Register of Deeds show any activity on the property known as Lot 38 on First Street (1023 West 1st Street) with Fred Ellis and his wife selling to C. H. & Fannie Lebold via a Quick Claim Deed.

In 1885 the Lebolds sold to Theodore St. Peter.  Born in Quebec, Canada, he came to the United States in 1860, serving in the Civil War as a member of Co. A, 35th Regulars of Iowa Infantry Volunteers.  He came to Kansas in 1879, living in Abilene until he died in 1919, with services being held at his home.  During a city council meeting, he received the contract for temporary care and supervision of the streets and alleys of the city; provided the compensation for such care and supervision, including the use of a team, would not be more than at the rate of $75 per month.

Mr. St. Peter lost the home, and it was put up for Sheriff Sale in 1896; selling it to Sarah Porter, who retained ownership for three years before selling it to Dr. Martin Kirsch, who had ownership until 1902.  Born in Mainz, Germany, he came to Abilene before 1886 and practiced medicine for over 50 years.  He was killed while walking for exercise when struck by a car as he was crossing the pavement.

The property changed hands many times over the next 97 years – the property was sold to: 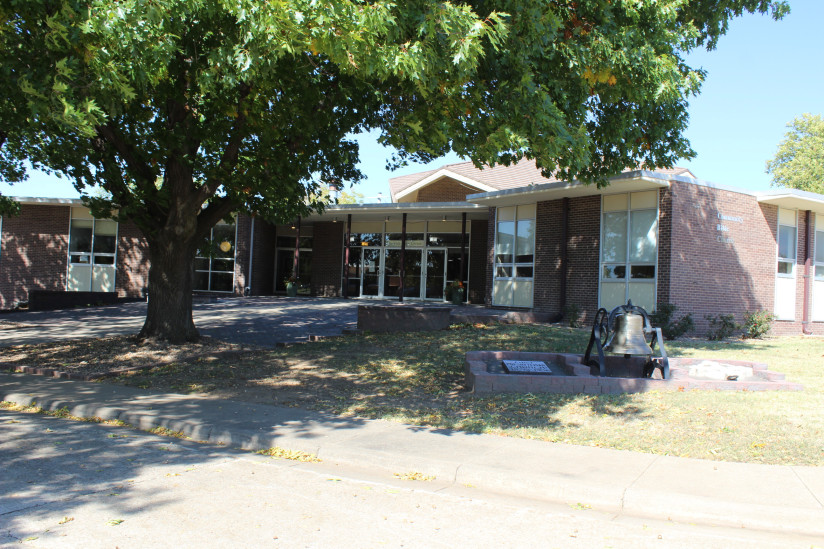 Community Bible Church in Abilene, Kansas, was founded in September 1985 as a non-denominational church. Through the years, the church body has met in various locations. From September 1985 through January 1989, the church met in the basement of Priem’s Pride Motel, which was located at 1709 N. Buckeye. Then from February 1989 through November 1990, the church met at the newly-constructed Senior Citizen Center at 100 N. Elm Street.

In November 1990, a vacated office building at 712 S. Buckeye was purchased and served as the home for Community Bible Church for almost six years. As the congregation grew, it became clear they needed a larger facility. In the summer of 1996, Emmanuel United Methodist Church planned to vacate and sell its former building at 121 NE 5th Street and move into its newly-constructed facility.   Community Bible Church purchased the building on 5th Street, and that location served the congregation well for over twenty-three years.

In 2019, First Presbyterian Church in Abilene decided to sell its building at 1400 N. Cedar Street, fifty years after it had been constructed in 1969.

With a growing congregation and the limitations of an older building on 5th Street, Community Bible Church was blessed to be able to purchase the former Presbyterian Church building in November of 2019. Desiring to do several renovation projects, such as adding an elevator and constructing additional office space within the building before moving in, along with the onset of COVID in March of 2020, the actual transition did not occur until late spring or early summer of 2020.

Community Bible Church is grateful for God’s faithfulness over the past thirty-seven years, including the variety of locations He has provided. We trust that the Lord will allow us to use our present facility at 1400 N. Cedar Street for many years as we seek to honor and serve Him in the Abilene community and beyond.

We invite you to enjoy refreshments compliments of the Community Bible Church.