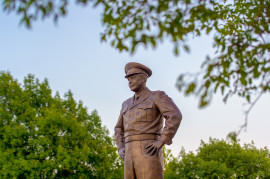 Dwight D. Eisenhower loved calling Abilene his hometown. The Kansas city reciprocated its affection for the man who would go on to become a five-star general, head the D-Day invasion of Europe that changed the direction of World War II and then go on to be elected the 34th president of the United States. However, as you explore the city of about 6,500, you learn there’s much more to Abilene than being the home of President Eisenhower.