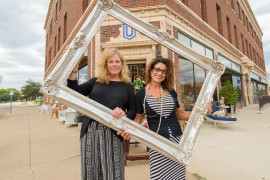 When the Manhattan, Kan., native decided to live in Abilene full time – she’s owned a Victorian house in town for more than 20 years – she thought an antique store would work. Sitting at a major intersection, Cedar Market Street Antiques is in a prime location for shoppers. Abilene’s downtown is an attractive mix of businesses, including Rivendell bookstore and the Jeffcoat Photo Museum. The district is also home to clothing and hardware stores, as well as restaurants. Murals depicting Kansas history are painted along buildings.