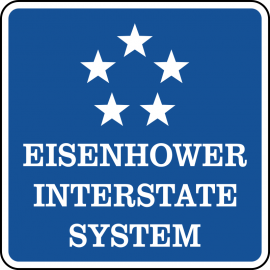 When we think about road trips — and, now that schools are out or mostly so, we may be — we rarely think about the road itself, especially the big, rumbling, boring interstates that lace together our country.

Why should we? They’re the method, not the merriment.

But consider this: More than half of traveling families will vacation by car this year, AAA reported, as they explore America. For this we must thank President Eisenhower (with a tip of the hat to his predecessors) for this amazing grid of roadways. The interstate highway system is the mother of Road Trip 2.0, which means the big roads often do the work of getting us to the two-lanes of blacktop where the adventure begins.

The need for a network of roads became clear as the number of privately owned automobiles grew from 20 million in 1927 to 54 million in 1956, according to the Federal Highway Administration.

With other things occupying the national agenda — economic recovery and World War II, not the least among them — the initiative did not get off the ground until 1956 with the Dwight D. Eisenhower National System of Interstate and Defense Highways, the largest public works project in U.S. history and, some would say, in the world.