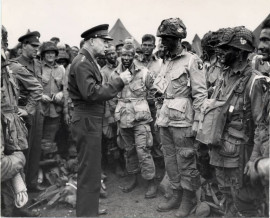 Seventy five years after General Dwight D. Eisenhower gave the go-ahead for Louis Graziano and some 156,000 fellow Allied troops to storm the beaches of Normandy, France, the D-Day veteran will be a guest in Eisenhower’s hometown of Abilene.

Graziano, who turned 96 in February, has been invited to talk about his World War II experience, which started when the New York native entered the Army as a 19 year old in January 1943. He was in the third wave to hit Omaha Beach on June 6, 1944, in the surprise attack orchestrated by Eisenhower, then supreme commander of Allied Expeditionary Forces, on German-occupied France that set the stage for Europe’s liberation.

Graziano was invited by the Eisenhower Foundation and the Eisenhower Presidential Library, Museum and Boyhood Home in Abilene, 90 miles north of Wichita, which is organizing a D-Day 75th Anniversary Commemorative Week June 1 through 6.