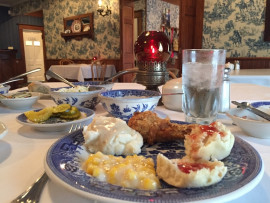 First appearing in cookbooks in the 1800s, fried chicken is as American as apple pie. While the American South is most notably credited with having the best fried chicken in America, it’s a dish that can be enjoyed from coast to coast. In the American Midwest, these are the best places to enjoy fried chicken according to midwestern travel writers.

While the English typically boil or bake chicken, the Scots in the northern part of the British Isles deep fried chicken as early as the middle ages. But unlike fried chicken enjoyed by Americans today, they didn’t season or bread the bird first. Meanwhile, 4,000 miles south of Scotland, West Africans seasoned and battered their chicken before cooking. The two cuisines were merged by African slaves in the American South. Once seasoned and battered, fried chicken can be cooked in a pan, deep fried in oil, pressure cooked, or prepared in an air fryer.

For the best fried chicken in the Midwest, visit one of these restaurants recommended by midwestern travel bloggers.