By Abilene Reflector-Chronicle on January 3, 2020 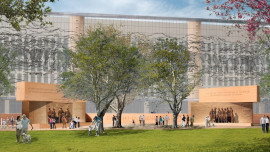 Twenty-one years into the making, the dedication of the Dwight D. Eisenhower National Memorial is planned for 2 p.m. May 8 in Washington D.C. on the 75th anniversary of VE Day.

The memorial was commissioned in 1999 to honor Dwight D. Eisenhower as the Supreme Commander of the Allied Forces in Europe during World War II and 34th President of the United States.