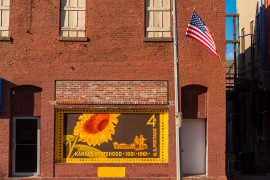 It was like a Norman Rockwell painting come to life, an idealized version of an America that might or might not still exist — if it ever did at all. And it can be found in Abilene, Kan.

Now, Abilene is known for many things, or at least as many as any other town of 6,200 people. It once marked the end of the Chisholm Trail, used by Texas cowboys to bring cattle to the railroad. And it once was marshaled by Tom “Bear River” Smith, but he was murdered and decapitated. And it once was home to United Telephone Company, which now is known as Sprint.