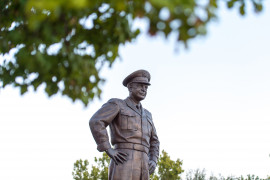 Before he commanded the liberation of Europe and led the nation through the height of the Cold War, Dwight D. Eisenhower grew up with traditional Midwestern tastes. In England, commanding forces that would successfully invade two continents, he turned down fancy meals his assigned cook offered in favor of fried steak, corn pudding, chicken soup, and other dishes reflecting his Kansas boyhood. As the pressure of the looming D-Day invasion mounted in the spring of 1944, Ike would occasionally relieve the almost unbelievable stress by cooking his own breakfast, even washing his own dishes.

Ike took pride in his down-home familiarity with the kitchen, and as president, he collected some of his favorite recipes in a White House file. One, found in the Dwight D. Eisenhower Presidential Library, was Ike’s special favorite around holiday time. Archived in the Presidential Papers under “Beverages,” President Eisenhower kept a declassified recipe for bourbon eggnog. As a boy, Ike worked in an Abilene creamery, and like Eisenhower the President, Ike’s recipe takes the “middle way,” combining the enjoyable sweet wholesomeness of postwar America with bourbon-backed strength Ike believed in.

I made Ike’s 5-star recipe after researching my book Brothers Rivals Victors and found his holiday drink spectacular. If you enjoy a glass of nog as part of your yuletide festivities, this recipe is as good as anything you’ll find in stores. It doesn’t take long to make, and you can substitute your favorite rum or brandy in place of the General’s preferred bourbon.