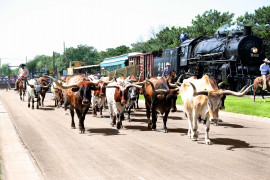 Located on the Smoky Hill River’s north bank, about 95 miles west of Topeka, Kansas, Abilene is the county seat and largest city of Dickinson County. Though best known as the Queen of Kansas Cowtowns, Abilene already existed for a decade before the cattle came to town.

First settled in 1858, it was named by Timothy and Eliza Hersey from a passage in the Bible, meaning “city of the plains.” The first terminus of and later a station on the Butterfield Overland Stage Line, the Hersey’s secured a contract with the company to feed the passengers and employees. The establishment, consisting of two log houses, a log stable, and corral for horses, advertised to the westbound traveler: “the last square meal east of Denver.”

The next structure built was a dwelling known as “the Hotel,” owned by C. H. Thompson, and located on the east bank of Mud Creek. More homesteaders began to come to the area and among one of them was a man commonly known as “Old Man Jones,” who erected a log house which he turned into a store, selling some limited supplies, but mostly whiskey.