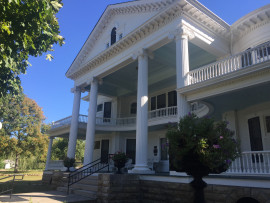 Once the homes of land barons, bankers, railroad tycoons, and shipping magnates, giant mansions would often stand tall on bluffs and hills, overlooking towns across the Midwest, much like a king looking down on his fiefdom. With wings set aside for family members, entertaining, or other reasons, mansions showed the rest of the world how wealthy you were.

Today, several mansions from the late 19th and early 20th centuries are museums of sorts, telling the stories of the families and their impacts on their communities.

From President Theodore Roosevelt to Thomas Edison, celebrities and dignitaries often dined at Seelye Mansion. The 25-room estate was built in 1904 for Dr. A.B. Seelye and his wife, Jeannette. The couple often entertained visitors in the dining room, so as you walk through the room, you can imagine where the president may have sat, or even reflect on the fact that Edison, the famous inventor, sat at the table sharing a meal with the Seelyes. You’ll find a century-old Steinway piano that may be played by a tour guide. The home included a dance hall on one of the upper floors, where the Seelye family would host large parties. The family enjoyed bowling in its single-lane basement bowling alley. Dr. Seelye was also known for a series of medical patents, which are celebrated as part of a medical patent museum in the rear of the mansion. The Seelye Mansion is a must-see during the holiday season, when more than 750 nutcrackers and about 75 poinsettias are located throughout the magnificently decorated house. The Seelye Mansion has been recognized as one of the “8 Wonders of Kansas.”