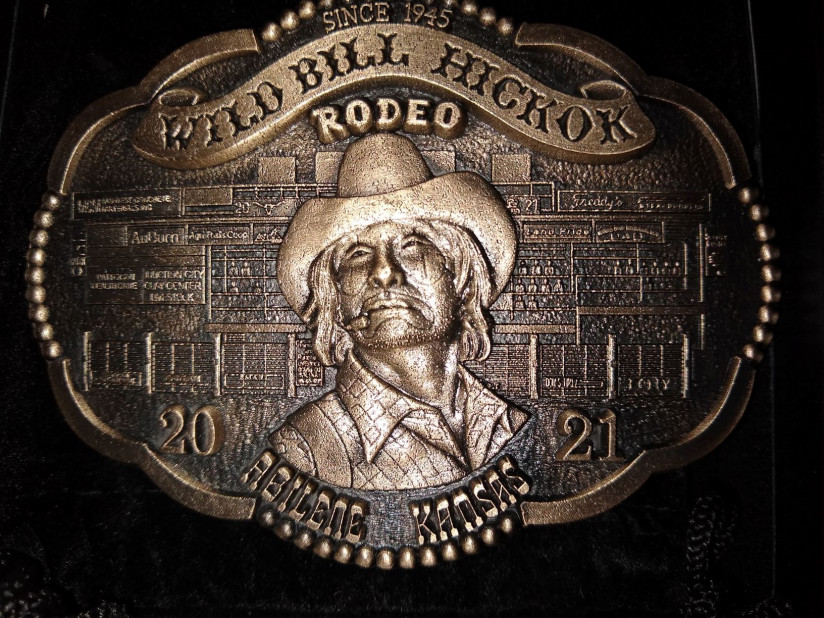 A man near and dear to the hearts of rodeo fans in Abilene and around the nation has been memorialized on a Wild Bill Hickok Rodeo buckle.

Lecile Harris, a Pro Rodeo Hall of Fame rodeo clown who performed at Abilene’s Wild Bill Hickok Rodeo a dozen times, is the feature on the 2021 buckle.

Harris passed away unexpectedly in February of 2020, hours after working a rodeo in Jackson, Miss. the night before.

He was born in 1936 and lived in Collierville, Tenn., becoming a PRCA member in 1982. He started his rodeo career as a bullfighter, working both as bullfighter and funny man, before the roles evolved and the acts and jokes were done solely by the rodeo clown.

Harris was a session drummer and songwriter in the Memphis area during the 1950s and early 60s and performed on television and in films, including Hee Haw, Walking Tall: The Final Chapter and The Last Days of Frank and Jesse James.

Harris’ first year to clown at the Abilene rodeo was in 1993, with Phil Gardenhire as the announcer. Rodeo chairman Jerry Marsteller remembers hearing stories from rodeo committee members that Harris and Gardenhire were instrumental in making fan-friendly improvements, changing from bullhorns for speakers to a real speaker system, and changing from the rodeo band, made up of locals, to popular music played over the loudspeaker.

After the first night of rodeo in 1993, Harris and Gardenhire had convinced the committee enough that they went to Salina to rent loudspeakers and sound equipment.

Harris and Gardenhire worked the Abilene rodeo every year from 1993 to 1998, until Gardenhire died in an auto crash in 1999.

He was well known for his professionalism and timing, said long-time friend Mike Mathis, the voice of the Abilene rodeo, who began working with Harris in the early 1980s.

“He was a stickler for his makeup and his props,” Mathis said. “Everything had to be a certain way.” His comedic timing was impeccable, too. “He had a way to interact and work with the crowd that is very difficult to find. Lecile worked very hard making sure everything was in order and put together. He was a fanatic.”

Harris was personable outside the arena, with rodeo committee people and fans, Marsteller said. He remembers hearing Harris’ jokes about his wife, who he nicknamed “Tundra” as part of his act, and then having the chance to meet her at a PRCA rodeo convention. Marsteller and his wife Deb sat down for a meal with Lecile and his wife Ethel. “We got to meet Tundra,” Marsteller chuckled, “and we just sat and visited and visited. “

Harris’ presence is still missed at rodeos across the nation, Mathis said.

“He can’t be replaced. He was a supreme entertainer.”

This year’s buckle is part of a series of buckles, each featuring different people or subjects, that started in 1989.

The annual buckle auction for the rodeo will be held Monday, August 2 at the historic Shockey and Landes Building in Abilene at 324 North Broadway.  Buckles numbered one through ten and number 500 will be auctioned off.

Social hour for the auction begins at 7 pm, with the auction to follow at 7:30 pm. The rodeo takes place August 4-7 at 7:30 pm each night in Abilene at Eisenhower Park. For more information, visit www.WildBillHickokRodeo.com

For more information, visit the website at WildBillHickokRodeo.com or call 785.263.4570.

Cutline: Pro Rodeo Hall of Fame rodeo clown Lecile Harris is featured on the 75th-anniversary buckles for the Wild Bill Hickok Rodeo in Abilene. He worked the rodeo a dozen times.