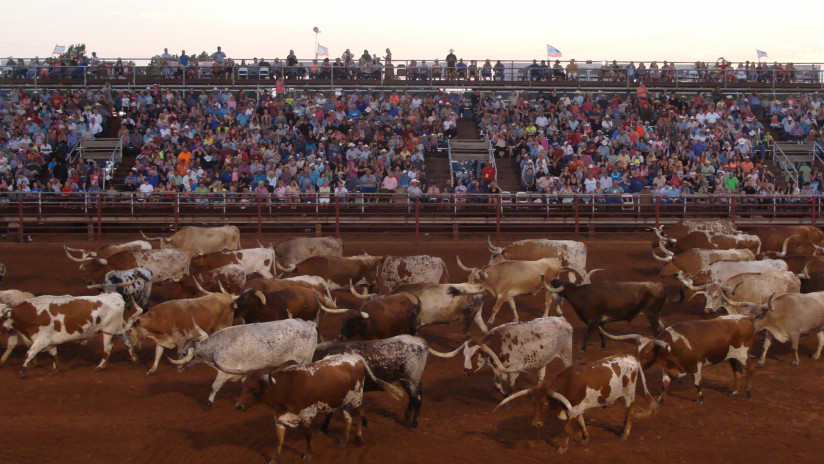 A herd of Texas longhorn steers will be in Abilene for the Wild Bill Hickok Rodeo and the Central Kansas Free Fair parade. The majestic animals are the same breed as was driven from Texas to Abilene by cowboys over 150 years ago.

Just like in the days of yore, Texas longhorn cattle are about to take over the streets of Abilene.

The Sander Ranch Longhorns will be part of Abilene’s Central Kansas Free Fair parade on August 5 at 4 pm, and will be part of the opening of the Wild Bill Hickok Rodeo August 4-7.

The majestic beasts will go down the parade route, and mill around the arena prior to each night of rodeo.

They are owned by Wes Sander of Woodward, Okla., who has had longhorns since 1998. A Woodward, Okla. rodeo committee member, he wanted a way to promote the rodeo. He bought 50 head of longhorn steers, broke to drive. He used them in a cattle drive with great success, garnering publicity from across the state. They “were a huge hit,” he said.

Sander will bring between 25-40 steers to Abilene. He’s in his fourth generation of steers, with the average animal living between twelve and fifteen years. They weigh about 1,200 lbs.at maturity with a horn span from five to eight feet across.

“Driving” cattle means moving them from one place to another, usually with cowboys on horseback. A young steer learns how to be driven, and Sander tries out the young ones each year when he drives the herd from his ranch to Woodward, Okla. The ones that don’t follow along or get out of line have no place in his herd, so he sells them.

The steers have a good life, he said. “All they have to do is behave themselves, look pretty, and don’t act dumb.”

They aren’t as stupid as people might think, he says. They remember the routes at different rodeos, from where their pens are to the rodeo arena. He’s taken the steers to countless rodeos and western events, from Greeley, Colo. to Dallas, Texas; from a Dodge automotive show in Detroit to Omaha, Neb.

There’s always a lead steer, Sander said, one that is the dominant animal and leads the way. In the old days of cattle drives, lead steers would lead the herd from Texas to the railheads in Kansas. The lead steer wasn’t sold with the rest of the herd; he was taken back to Texas, to lead the next herd north. Sander has two lead steers: JB, and 911. The herd is sometimes at two different events on the same days, so the leads split up to go two different ways.

He and his son Cody and wife Jill help out with the herd. Cody will cowboy, driving the herd, or take them to one event while Wes is at another.

The longhorns are easy keepers, he said. “They’re not babied. They take care of themselves.

“They are very tough, very resilient, very smart animals. Smarter than people. I don’t worry about the steers,” he said.

The 75th  Wild Bill Hickok Rodeo will be held August 4-7 in conjunction with the Central Kansas Free Fair in Abilene, Kan. Performances start at 7:30 pm each night. Tickets are $7 for children ages 4-10; $10 for advance purchase adult tickets (plus a $2 handling fee if purchased online) and $13 for adults at the gate. They can be purchased online at www.CKFF.net (through August 3) and at various local retailers. For more information, visit www.WildBillHickokRodeo.com.