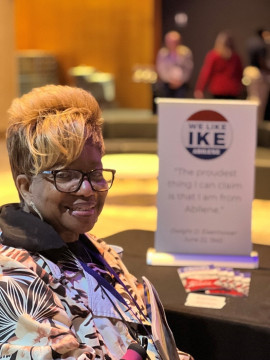 The Abilene Convention & Visitors Bureau hosted a booth at the African American Travel Conference in Topeka on April 12. The event, hosted in partnership with Visit Topeka and TourKANSAS, celebrated Kansas’s tourism industry and must-see communities and attractions.

“This was a great event that allowed us to meet face-to-face with group tour planners,” Julie Roller Weeks, Abilene CVB director, said.

“Attendees enjoyed hearing about the new exhibits at the Eisenhower Presidential Library and Museum and understood Ike’s role in creating the Interstate System,” she said.

One attendee shared her special connection to Ike.

Judy Patterson, a disability advocate, motivational speaker and tour planner, shared she had polio as a child and wore leg braces. She was featured in an advertisement when she was a young girl in the 1950s alongside Ike that read ‘Ike says Merry Christmas and Judy does, too!’.

“It was great to meet face-to-face with these planners and share Abilene’s story!” Roller Weeks said. “I look forward to seeing them again in Abilene.”