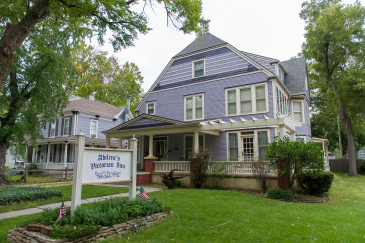 This lovely Victorian home was built in 1887 by Dr. Edward E. Hazlett. Hazlett’s son, Edward “Swede”, was a close childhood friend of Dwight D. Eisenhower. It was Swede who persuaded Ike to apply for an appointment to the United States Naval Academy. Both Hazlett and Eisenhower passed the entrance examination, but Eisenhower was barred from entrance because he exceeded the maximum allowable entrance age. With that, Hazlett attended the Naval Academy and Eisenhower accepted an appointment to the United States Military Academy at West Point. The two remained lifelong friends.