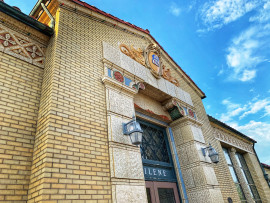 Offices for the Abilene Convention & Visitors Bureau and Dickinson County.