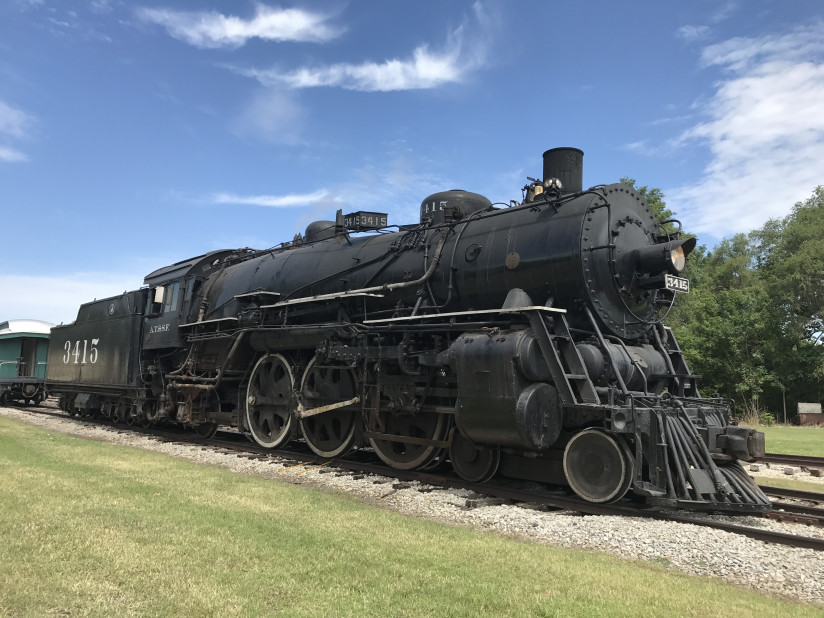 Ride the rails on a 100-year-old steam engine, enjoy an open-air car ride or dine aboard one of the Abilene & Smoky Valley Railroad’s dinner trains. The train departs Abilene eastbound for a 10½ mile round trip through the Smoky Hill River Valley to the neighboring community of Enterprise, KS. In Enterprise, the train stops for riders to see the Hoffman Grist Mill, with a rebuilt working waterwheel that mills flour.

The railroad is operated by volunteers, which includes engineers, conductors, brakemen, car attendants that narrate every trip and depot workers. Volunteers also take care of the mechanical work and track maintenance.

This is the only operating steam locomotive in the State of Kansas and is one of only three operational, former Santa Fe steam locomotives. Plans are that the steamer will operate about once a month on special weekends on our five-mile long track, a former Rock Island Railroad branch, through the Smoky Hill River valley between Abilene and Enterprise, Kansas.

Situated next to the Smoky Hill River in Enterprise, KS, the Hoffman Grist Mill pays homage to Christian Hoffman (1826-1921) and his family.  Mr Hoffman purchased the water power rights at Louden Falls in 1868.  His first flour mill began operation at that location in 1869.  Mr. Hoffman named the town that grew around his mill “Enterprise”.  A post office was established in 1873.

The flour mill, located at 105 N. Factory St. in Enterprise, KS, is open on Saturdays from 10am until 3pm and also on days that the Abilene & Smoky Valley Railroad operates trains to Enterprise.  Train passengers are invited to visit the flour mill during the train’s layover in Enterprise to explore the mill, see how it operates, and make purchases.  Flour produced in the mill may also be ordered and shipped to your home.

May, September and October

* NOTE: On the dates that the steam locomotive operates pulling the regular passenger trains the fare is higher.

One-way Locomotive and/or Caboose rides are available for an additional fare.

All trips are narrated and last approximately 1 hour and 45 minutes.