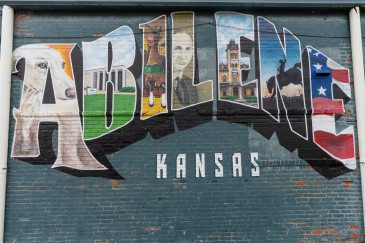 A: The National Greyhound Association where all racing greyhounds are registered and the Greyhound Hall of Fame is located here.

B: Dwight D. Eisenhower was raised in Abilene.

I: The Parker Carousel was built in 1901 and is part of the Dickinson County Heritage Society and Museum.

L: C.L. Brown was a pioneer in the field of electricity and telephony, starting the companies that are now Evergy and Sprint.

E: The Lebold Mansion was built in 1880 over the dugout which was the home of the Tim Hersey family, the founders of Abilene.

N: The cowboys drove the longhorns from Texas to Abilene on the Chisholm Trail.

E: The flag represents the boyhood home of the 34th president of the United States, five-star general and Supreme Commander of the Allied Forces, “Ike.”