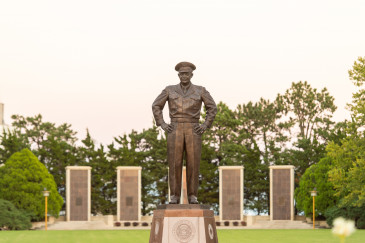 See the 11' statue of 5 Star General and 34th President of the United States, Dwight D. Eisenhower. The bronze statue of Dwight D. Eisenhower by Robert L. Dean, Jr. was presented to the Eisenhower Presidential Library and Museum by the Harry and Edith Darby Foundation. The statue depicts Eisenhower in the familiar World War II "Eisenhower Jacket." The Georgia granite base has quotations from Eisenhower's illustrious careers as President of the United States, Supreme Commander of the Allied Expeditionary Forces, General of the Army, Supreme Allied Commander of Europe, and Chief of Staff of the Army.